They shouldn’t be stunned (they should just be angry); this kind of idiocy is unfortunately becoming increasingly common…

A sculpture being installed at a New Zealand railway station is causing amusement among locals who say it looks like a giant penis.

The aluminium artwork called Transit Cloud is suspended outside the station in New Lynn, a suburb in the northern city of Auckland, and is meant to represent clouds and raindrops, according to sculptor Gregor Kregar. But residents say the piece, which cost the city NZ$200,000 ($150,000; £100,000), looks more phallic in nature, the New Zealand Herald reports. “What the hell is that? It’s certainly not a cloud. It looks like a penis,” one woman tells the paper. “I was surprised that it was erected,” another local says on the 3 News channel. “Maybe the angle could be slightly shifted to change the visual concept”.

Mr Kregar says he’s found the reaction only “a little bit upsetting” and has been able to see the funny side. “Art is there to provoke the reaction,” he tells TVNZ. “Usually for the one negative comment there’s thousands of positive comments as well.” The council commissioned the artwork as part of efforts to revitalise New Lynn, and some locals have reacted positively, describing it as “terrific”. Mr Kregar says the finished sculpture will feature LED lighting and will look different by night. “Hopefully the opinion will change through time when the sculpture is installed and they’ll embrace the work.”

Culture war can be waged back!

That thing I wrote about the other day? 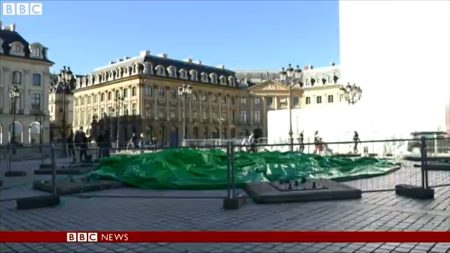 A huge inflatable sculpture inspired by a sex toy has been sabotaged days after it was installed in Paris.

The 24m (80ft) sculpture on Place Vendome in Paris was brought down when supporting cords were cut.

Earlier, US artist Paul McCarthy told a French newspaper that he was attacked by a man who said the sculpture had no place being on the street.

The sculpture is part of the week-long International Contemporary Art Fair in the French capital.

The art fair said it would restore the deflated sculpture as soon as it could.

McCarthy told French newspaper Le Monde that his work, entitled Tree, was an “abstract work” rooted in a joke about a sex toy and was also inspired by a Christmas tree.

Police said the sculpture had been attacked overnight.

“An unidentified group of people cut the cables which were holding the artwork, which caused it to collapse,” police said.

Paris Mayor Anne Hidalgo said the attack was unacceptable, and also denounced the attack on McCarthy.

“Paris will not succumb to the threats of those who, by attacking an artist or a work, are attacking artistic freedom,” she said.

“Art has its place in our streets and nobody will be able to chase it away.”

Kudos to whoever did it! 🙂

And may the same fate meet any replacement work (hey, if it’s really art, wouldn’t it be ‘irreplaceable’, like if someone defaced the Mona Lisa, for instance?)

All is fair in love and war, say some.

Well, this is a war. A culture war.

And culture war can be waged back!

A huge, green, inflatable sculpture on a famous Paris square has raised a storm for its resemblance to a sex toy, with the artist attacked in the street.

US artist Paul McCarthy told French newspaper Le Monde that his work entitled Tree had been inspired both by a sex toy and a Christmas tree.

When he went to see it on Place Vendome, a man slapped his face before running away, the paper says.

The stranger, who slapped him three times, shouted that he was not French and that his work had “no business being on the square”, the paper writes.

The square with its towering Column, Napoleon’s monument to the Battle of Austerlitz (closed until next year for restoration), is famous for its luxury hotels such as the Ritz.

Good on the man who slapped him – he’s right about it not belonging there – and the others who have condemned it.

Alas, as the article mentions, some folks thought it was a lark.

Will S.’ Sunny Side Blog